One in six people in the United States has, knowingly or unknowingly, had a herpes infection at least once. While only one-third of those affected with this sexually transmitted infection show any symptoms, even those who do are unable to successfully identify it like herpes. Why is that?

Herpes brings with it a rash that resembles quite a lot of different conditions – another sexually transmitted disease such as warts or syphilis, ingrown hairs, bacterial vaginosis, yeast infections (thrush), hemorrhoids, bug bites, irritation caused by shaving, and quite commonly, pimples.

You would not want to mistake something serious like herpes with something very routine like acne (pimples). Therefore, it is important to understand what can be mistaken for herpes and what herpes really looks like.

Pimples vs Herpes Blisters – Why do they happen?

HSV comes in two forms, of which HSV-1 presents itself as blisters on the mouth (oral region), including cold sores and fever blisters, and is thus associated with oral herpes. Meanwhile, HSV-2 affects the genital region and causes genital herpes. This does not mean that anyone with blisters on their mouth must have been infected with HSV-1, as they could very well have inherited HSV-2 from an infected partner’s genitalia via oral sex.

On the other hand, pimples are linked to hygiene issues. They arise when dirt or oil clogs up the pores (oil glands or sebaceous glands) on the skin, increasing the likelihood of bacterial infection and inflammation. The pores may also be clogged by other conditions such as folliculitis (fungal infection in a hair follicle) or contact dermatitis (skin contact with an allergen). 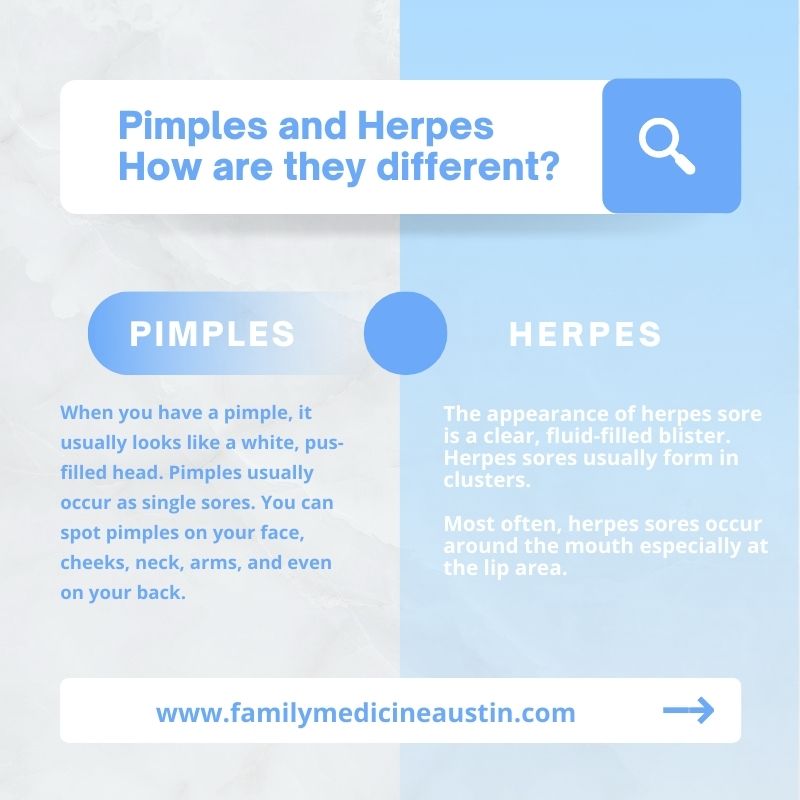 Pimples and herpes rashes appear as small, red bumps full of pus on the skin of your mouth or genital region. Both also may itch, but there are considerable differences between the nature, pus, and location of the two, which is what allows you to never mistake pimples for herpes.

Herpes looks like white, yellow, or red translucent sores or bumps, filled with a clear liquid, whereas pimples are pink or red and are not see-through. While pimples may appear individually as well as in clusters but in recognizable patterns, herpes sores are primarily observed in a bunch.

Pimples are perfectly round and feel firm and hard if you touch them. They itch but they are not painful unless you especially apply pressure to them. On the other hand, herpes sores are extremely painful red ulcers, lying on skin that has also become itchy, reddish, inflamed, and sensitive.

Herpes rashes occur in recurrent cycles of about 2 weeks, which include their appearance, growth, and crusting before eventually bursting to leave behind an ulcer-like sore and scrabs. The bursting is very painful itself. This cycle keeps repeating until there is medical intervention, and before the appearance of the next sore, there is a painful and sensitive itching sensation. The first occurrence is the most painful one.

If you feel like your sores keep appearing and then disappearing, it is most likely herpes because pimples follow no such cycle. They can appear anytime and clear up quickly on their own, the time of fading depending upon the amount of pus stored within.

Besides knowing what herpes looks like, it is also crucial to understand what herpes discharge looks like and how that differs from that of pimples. As established above, herpes sores are filled with a clear liquid, but pimples store thick, white pus inside.

In both circumstances, the pus leaks upon the skin if the blister is burst, squeezed, or scratched, enhancing the risk of secondary infections. This is why it is strictly advised to not burst any sore or pimple.

Bursting either of them can also mean a discharge of blood. While the sores are themselves not full of blood, bursting of the skin underneath will cause bleeding.

Since pimples are caused by clogged-up pores, they are located within the pores themselves. This means that they are embedded into the deep layers of the skin, as opposed to herpes sores which lie externally on the surface of the skin. Pimples only expand above the skin if they accumulate enough pus to do so.

Herpes sores appear on the mouth region, as well as the genital region which not only includes the genitalia (penis and vagina) but also areas such as the rectum, buttocks, cervix (in women), and thighs. On the other hand, pimples can appear anywhere.

It is more likely for pimples to appear in areas where sweat and dirt can accumulate, such as where you wear tight clothing, for instance, tight underwear, bra, jockstraps, etc. Their occurrence increases during summers because your whole body may sweat then.

To not mistake pimples for herpes, it also helps to consider whether the sores are isolated or are accompanied by other symptoms which include:

How do you know for sure?

If the nature, location, and other characteristics of your sores are not enough for you to draw a confident conclusion, medical testing is the only way to have a definitive answer. This can mean any one of the following tests:

Pimples test negative for all these tests.

What do I do now?

Once you successfully identify the nature of your sores, which should be an easy task now that you know what herpes looks like, the management is not that complex either. Since pimples are a hygiene issue, it only means a more thorough cleaning with effective products such as acne ointments, antibacterial soap and creams, oil ointments for inflammation, and patting with a warm, wet cloth a few times a day.

On the contrary, if you have even a little doubt that your sores may be herpes, you should visit your primary care physician and get an anti-viral prescription. Herpes may be incurable but anti-viral is more than enough to stop it from affecting your quality of life at all. Early identification is the key to a better life.

I am Jeannette, the medical writing specialist here at Family Medicine Austin. I have over five years of experience working with a range of medical and healthcare across the U.S.

Complete The Form Below And We’ll Get Back To You Immediately.

Hear What Our Patients Are Saying.